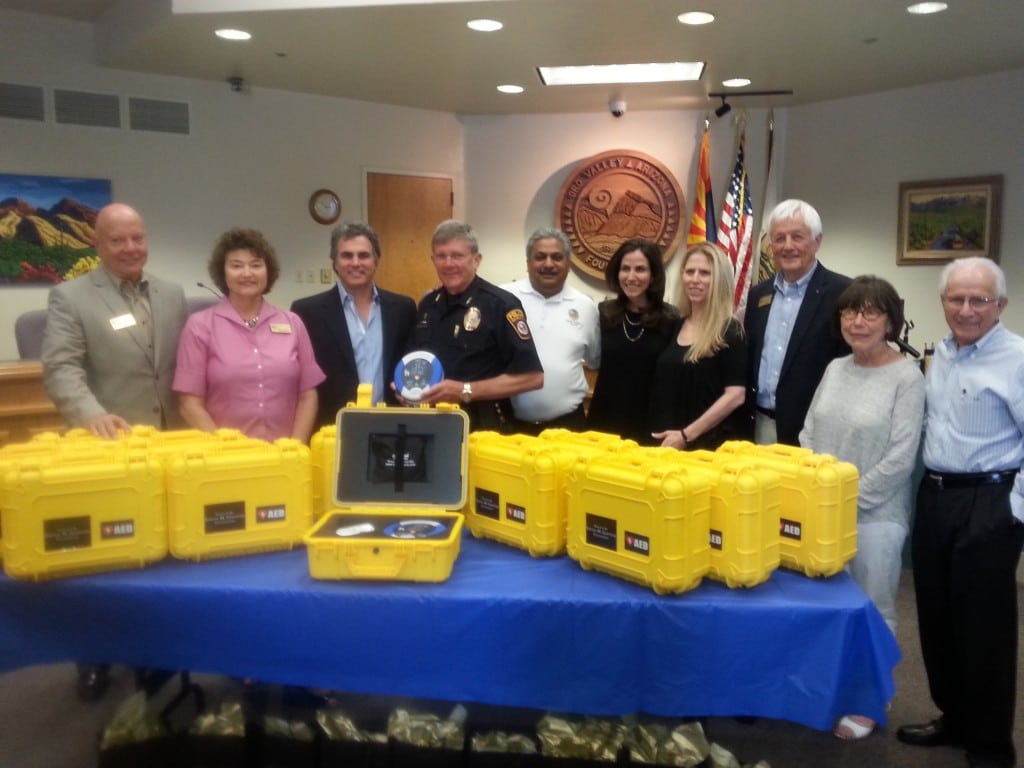 Chief Daniel Sharp, holding one of the donated HeartSine AEDs, is joined by Mayor Satish I. Hiremath (on his right) and staff of the police department and the Steven M. Gootter Foundation.

The Oro Valley Police Department and over 41,000 citizens of Oro Valley, Arizona are now heart safe after the police department received a donation of 12 HeartSine® Automated External Defibrillators (AEDs) to protect the city’s citizens in the event of a Sudden Cardiac Arrest (SCA).

The AEDs were donated by the Steven M. Gootter Foundation, an Arizona-based organization dedicated to saving lives by defeating sudden cardiac death through increased awareness, education, and scientific research.

“Though SCA is the leading cause of natural death in the United States, most people are unaware of the danger it poses until it strikes close to home”, says Andrew Messing, President of the Steven M. Gootter Foundation. “Each year in the United States, more than 335,000 lives are lost to heart disease, many of which could have been saved if an AED had been present.”

During an SCA, the HeartSine samaritan® PAD 350P AED analyzes the heart rhythm and, if needed, delivers an electrical shock to victims in order to restore the heart to normal rhythm. It is designed especially for use in public areas inside a lightweight and easy-to-operate system.

With 84 percent of Sudden Cardiac Arrest events taking place outside of the healthcare setting, including at public parks, schools, and during sporting games, it is important to have an AED nearby in the event of a SCA emergency.

The HeartSine AEDs will be stored in rigid watertight carrying cases and kept in the police officers’ SUV cars in case of a cardiac emergency.