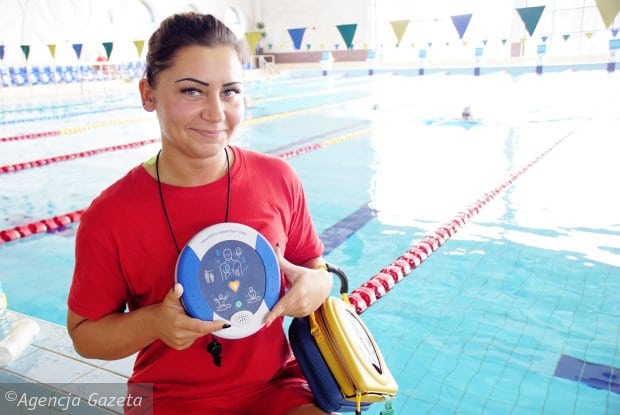 A man’s life was recently saved by a HeartSine samaritan® automated external defibrillator (AED) at Zielona Recreation Centre in Lubuskie, Poland. He was swimming in the pool at the recreation center when he lost consciousness and sank below the water. Lifeguard Pauline Niemczynowska and her colleagues quickly sprang into action pulling the man from the pool. They then dried him off, put on the defibrillator electrode pads, delivered a shock with the AED, and he woke up.

The man had suffered a sudden cardiac arrest (SCA). When someone suffers a SCA, every second counts, and the guidelines for the chain of survival for SCA state that early defibrillation is key to survival, as delaying the administration of a shock greatly reduces the effectiveness of treatment of SCA.

Kotowice, a village in Poland, has around 80 homes and 400 people. They are a positive example of an area in Poland that is being heart safe. With fundraising they were able to place a defibrillator in the community and are training at least two people from every household on how to use it in the event of an emergency.

The director of Zielona Gora Centre of Culture and Recreational, Robert Jagielowicz, congratulated the rescuers, saying “thanks to them a man lived”.

For our Polish speaking visitors, you can read the entire article by clicking here.