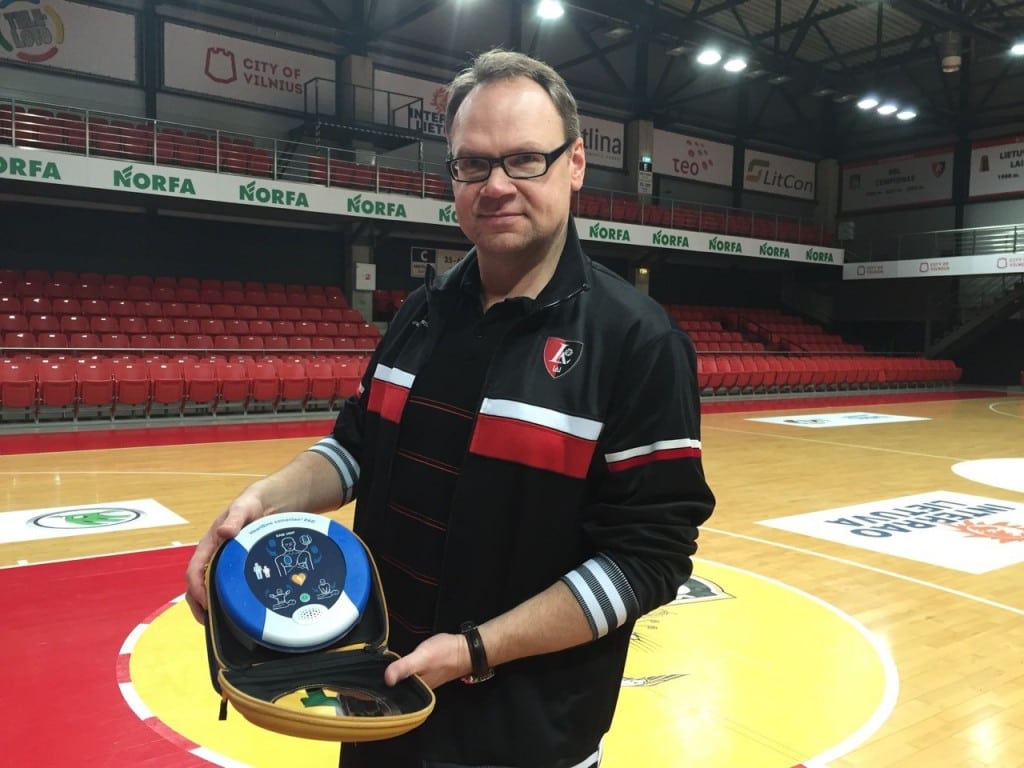 Lithuania’s BC Lietuvos Rytas basketball team and thousands of its spectators are now protected in the event of life-threatening cardiac emergencies after a HeartSine automated external defibrillator (AED) was awarded to the team in an AED program sponsored by Hopey’s Heart Foundation (HHF).

The lifesaving donation was part of HHF’s AED Grant Program, an initiative that supplies eligible participants with AED equipment for use during sudden cardiac arrest (SCA), a condition in which the heart suddenly and unexpectedly stops beating.

A HeartSine samaritan® PAD 350P AED, a device designed especially for use in public areas by providing a sophisticated defibrillator for adult or pediatric use, inside a lightweight and easy-to-operate system, has been awarded to BC Lietuvos Rytas.

BC Lietuvos Rytas first expressed interest in the AED Grant Program after losing one of their biggest fans in a cardiac emergency that took place in the team’s parking lot shortly after a game against Bamberg Brose. The unfortunate incident was a wake-up call, as the team feels that the victim could still be alive if an AED was present at the time. Installing a defibrillator on the grounds will ensure that players and spectators are protected in the event of a similar occurrence in the future.

The team will store the AED in the arena’s medical office, within very close proximity to players and fans, as for every minute defibrillation is delayed during SCA, the victim’s chance of survival decreases by seven to ten percent. After 10 minutes, typical survival rates drop to zero.

“Our team is so grateful for this invaluable donation. We love that the HeartSine AED is so portable and that it can be used by minimally trained bystanders of all skill levels,” says Tomas Vorobjovas, team doctor. This world is a much better, safer, and healthier place because of AEDs and these types of grant programs.”

“I am honored to have our first AED donation in Europe go to the BC Lietuvos Rytas team in Lithuania. Extending our program to Europe was an imperative move for our organization, and we plan to protect more Europeans from sudden cardiac arrest deaths by placing as many HeartSine AEDs as we can in public places throughout the continent.”

With 84 percent of sudden cardiac arrest events taking place outside of the healthcare setting, including during sporting events, it is crucial that sports teams and all public places have easy access to an automated external defibrillator in the event of a sudden cardiac arrest incident.

In order to apply to the AED Grant Program, applicants are required to be a nonprofit organization and need to complete a 500-word application addressing their need for an AED. Since the Grant Program’s launch in 2013, Hopey’s Heart Foundation has placed 133 AED packages in the United States, Europe, and the Middle East.