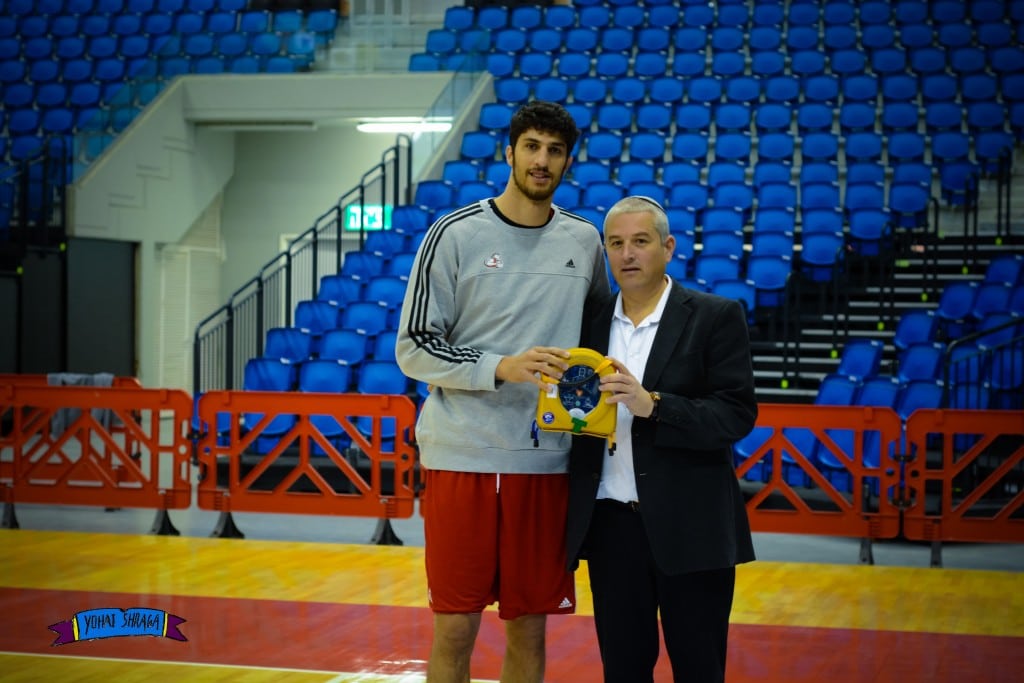 Due to the recent donation of a lifesaving HeartSine automated external defibrillator (AED) device, the players of Hapoel Jerusalem Basketball Club in Israel and thousands of their spectators are now protected in the event of a life-threatening sudden cardiac arrest (SCA) emergency.

The donation is courtesy of an AED Grant Program sponsored by Hopey’s Heart Foundation and Shaag Medical Group, an authorized distributor of HeartSine products in Israel. The AED Grant Program provides eligible participants with AED equipment for use during SCA, a condition in which the heart suddenly and unexpectedly stops beating.

The risk of sudden cardiac arrest is up to three times greater in competitive athletes, and two-thirds of all SCA incidents in athletes take place in the sports of basketball and football, so it was no surprise that Hapoel Jerusalem Basketball Club felt the need for an AED at their arena. Well-aware of the serious and often fatal implications of SCA, the club applied to the AED Grant Program with the goal of protecting the heart safety of its players and spectators during all practices and games.

“Sudden cardiac arrest is a leading cause of death among young athletes,” says Tina Charles, Hopey’s Heart Foundation Founder. “As an athlete who plays for the WNBA’s New York Liberty team in the United States and for the Fenerbahce basketball club in Istanbul, Turkey, I know first-hand about SCA and the avoidable tragedies that can happen when an AED is not present. I am driven to help in the fight against sudden cardiac arrest fatalities by placing AEDs in as many locations as I can.”

“As a professional basketball player myself, I am very excited to have our foundation’s first international AED donation go to Hapoel Jerusalem Basketball Club in Israel. It was important for us to extend our AED Grant Program to the global community in order to educate and protect people from life-threatening sudden cardiac arrest incidents.”

“With 84 percent of sudden cardiac arrest events taking place outside of the healthcare setting, including during sporting events, it is important for all sports teams and public places to have an automated external defibrillator on hand in the event of a sudden cardiac arrest,” said Eyal Greenbaum, Chief Executive Officer of Shaag Medical Group.

The club has strategically placed the HeartSine AED within close proximity to players and spectators, as for every minute defibrillation is delayed during SCA, the victim’s chance of survival decreases by seven to ten percent. After 10 minutes, typical survival rates drop to zero. The ultra-light and durable HeartSine AED will also accompany the team during travel games.

“We are very grateful and thankful for this donation. The HeartSine automated external defibrillator is another step towards the safety and wellbeing of our fans, players, and staff,” said Guy Harel, CEO & General Manager of Hapoel “Bank Yahav” Jerusalem Basketball Club.

In order to apply to the AED Grant Program, applicants are required to be a nonprofit organization and need to complete a 500-word application addressing their need for an AED. Since the Grant Program’s launch in 2013, Hopey’s Heart Foundation has placed 133 AED packages in the United States, the Middle East, and Europe.