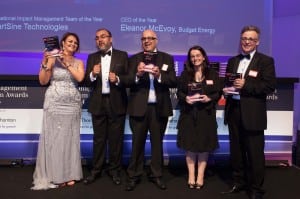 Dymphna Donaghy from HeartSine (second from right) who picked up the award at the ceremony in London.

Produced in partnership with Grant Thornton, the awards are an annual celebration of the best and brightest UK businesses which are backed by private equity and venture capital, illustrating the vital role the industry plays in driving the economy.

HeartSine – which is backed by venture capital houses ACT Venture Capital and Enterprise Equity – won in the International Impact category, a recognition of its status as a world leader in personal and public access defibrillators. Its lifesaving technology is exported to 70 countries and offers defibrillators in more than 29 languages.

“It is a real honour to be recognised on an international stage for our efforts in raising awareness of sudden cardiac arrest and the importance of access to defibrillators.

“We have received fantastic support from both ACT Venture Capital and Enterprise Equity, who strongly believed in our automated defibrillators. Thanks to them, we have produced a quality piece of medical equipment that can be used by anyone and has gone on to save countless lives.

“HeartSine defibrillators are designed to be quick and easy to use in cases of cardiac emergency and can increase the chances of a victim’s survival to over 70% as opposed to just 5% with CPR alone. The device analyses a patient’s heart condition and recommends a ‘shock’ to the patient if cardiac arrest is detected.

“We are extremely passionate about developing this technology even further and saving lives right across the world. Continued support from private equity and venture capital will allow us to realise this ambition and I am delighted with this most recent recognition for the work we have done so far.”

Now in its sixth year, the 2014 award ceremony took place at 8 Northumberland Avenue in London. It was the biggest ever ceremony with a record number of 61 nominees from a range of sectors and from across the country, reflecting the wide diversity of talent the UK has to offer.

“I’m delighted to see a number of really strong venture capital and private equity-backed companies in Northern Ireland being recognised.

“HeartSine securing the national BVCA Management Team Award for international growth is a tremendous accolade given the competition in this category throughout the whole of the UK, and should be a really inspiring story for others in demonstrating what can be achieved by Northern Ireland businesses in export markets.

“The Northern Ireland businesses winners would not have achieved this level of growth without the funding and support provided by their equity backers.”