Conklin, NY (August 30, 2010) – Longtime golf partners Ray Gee and Bill Gorman have never known their leisurely Friday night golf league to hold quite so much drama. But, on August 13th, the 8th hole of Conklin 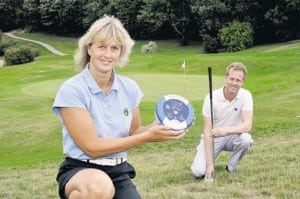 Players Club in Conklin, NY, became the scene of a lifesaving escue when Gee collapsed from Sudden Cardiac Arrest (SCA). The quick thinking of Gorman and two other league golfers, along with access to a HeartSine samaritan® Automated External Defibrillator (AED) at the clubhouse, are credited with saving Gee’s life.

According to Conklin Players Club Owner Theresa Rickard, when Gee collapsed, Gorman immediately started administering CPR, while another golfer, Matt Smith, ran to the clubhouse to retrieve the HeartSine AED. Gorman, a 29-year volunteer fireman for the Conklin Fire Department, then defibrillated Gee, while Brian Bailey, another member of their foursome, administered chest compressions.

Rickard said, “We’ve had the AED for a couple of years, but have never had to use it. We had it in the lobby – just in case – and I’m so thankful that we did.” Gee, a structural steel draftsman who resides in Binghamton, NY, and Gorman, an electrician who lives in Conklin, have been friends for 30 years. Gee said, “I’m very lucky that Bill was my partner. Not only is he a great golf partner, but he’s a great human being. He just took complete control of everything.”

Gorman said, “I was a First Responder years ago, and I did have CPR and defibrillator training. But that AED was so easy to use, it didn’t matter. Between the CPR, the defibrillator and the quick response of the ambulance, it was the perfect storm – in a good way.”

HeartSine Technologies CEO Gregory Cash said, “We’re thrilled that the Conklin Players Club had our portable AED and it played a part in this rescue. We know that having AEDs close to where an SCA event might occur, ensure that victims have a much greater chance of survival.”

SCA is the leading cause of death in young athletes and the leading overall cause of death in the United States. It is estimated to claim more than 425,000 lives annually. The HeartSine® samaritan® PAD Public Access Defibrillator is a medical device especially designed for public access use, to administer lifesaving treatment for Sudden Cardiac Arrest. It offers: ease-of-use, reliability & durability – with a 7 year unit warranty, IP56 certification – all at an affordable price.

About HeartSine Technologies (www.heartsine.com)
A world leader in personal and public access defibrillators, HeartSine’s mission is to advance the deployment of lifesaving defibrillation therapy in non-traditional areas of care through the development of proprietary technologies and quality products. Its HeartSine® samaritan® PAD is a sophisticated, lightweight Automated External Defibrillator designed for rescuers of all skill levels and is ideal for sports facilities, schools, churches and all businesses. Additional information: info@heartsine.com; (866) 478-7463, ext. 112.